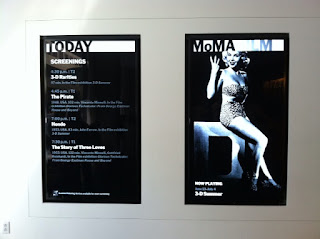 Arriving around 3:30 at the Museum for the 4:30 show of 3-D Rarities, there was already a decent-size crowd gathering. From running classic films for over 10 years at the Lafayette Theatre I built up a pretty good sense of how an audience is going to shape up and was not at all surprised by the anticipation these folks were feeling. I did recognize some people there who had been regulars at my shows so I knew the event was drawing people from far and wide. I met up with the 3-D Film Archives' head honcho Bob Furmanek, the Archives' Technical Director Greg Kintz, John McElwee of Greenbriar Picture Shows (Executive Producer of 3-D Rarities), and the Archives' Associate Producer Jack Theakston. Bob also introduced me to to the Museum's Adjunct Film Curator, Dave Kehr, who I was delighted to finally meet after reading his New York Times columns for so many years. The upper lobby quickly filled and we headed downstairs to MoMA's Theatre #2, which has a capacity of just over 200 people. While I was further chatting with Bob, Dave came by and told us that the last ticket had been sold and this was now officially a sell-out. Not a bad start at all. Unlike many museum shows, which contain a lot of museum patrons and gallery visitors, this audience was composed primarily of film and 3-D fans.

First up was the East Coast premiere of 3-D Rarities, which contains 94 minutes of rarely seen short films saved and preserved by the 3-D Film Archive. Courtesy of Bob, I had seats in a prime location - about eight rows up and just off the center of the screen. The sight lines in this theatre are good, it's got a fairly steep rake so the viewing angles are ideal. By the time the show was to begin the theatre was filled to capacity and Dave brought Bob up to the microphone to give an introduction to the program. This introduction was an essential part of the show as it put the origin and purpose of many of these shorts in the proper context. Seeing them cold with no foreknowledge wouldn't be half as much fun.

Starting with the earliest surviving stereoscopic film from 1922 and continuing through 1953's "Boo Moon", the sequencing is a delight. Presented in chronological order, the shorts painted a unique image of how filmmakers viewed the possibilities of stereoscopic cinema. There was a terrific reception to the early test scenes - many of which featured scores of huge off-screen effects - as well as a wild ride on Riverside Drive and a visit to Coney Island's Thunderbolt roller coaster. Always a audience favorite, "New Dimensions" (aka "Motor Rhythm") got a very strong round of applause as did "M.L. Gunzburg Presents Natural Vision 3-Dimension" - which features not only the human presence of Lloyd Nolan (cutaways of him listening intently to an ophthalmologist explain how eyesight works are a treasure) and Miss USA Shirley Tegge (with her own brand of 3-Dimension), but the antics of the original Beany & Cecil puppets as well.

From there, we moved into several trailers and another audience favorite, "Stardust in Your Eyes," which features music and comedy performer Slick Slavin doing impersonations of Hollywood greats in 3-D. This is another short that always gets a great audience reaction and delighted the museum crowd. Next up was the sobering "Doom Town", a rarely-seen and rather downbeat piece about a reporter's visit to an atomic bomb test outside of Las Vegas.

Fortunately, we moved into more entertaining avenues with the
Puppetoon-style "The Adventures of Sam Space", the racy-for-its-time "I'll Sell My Shirt" vaudeville short and concluded with "Boo Moon," a stunning cartoon featuring Casper the Friendly Ghost. When it began I could hear several audience members singling along with the theme song. There's something to be said about shared memory there.

All in all, the 3-D Rarities show was a huge success.Urge your local classic cinema to contact Flicker Alley and arrange to show it as these shorts are best seen BIG. If that's not possible, the next best thing is the Blu-ray release as it contains all of the above plus nearly 60 additional minutes of material, including animations from the National Film Board of Canada plus much more. Order from Amazon and wherever Blu-rays are sold, or direct from Flicker Alley HERE. 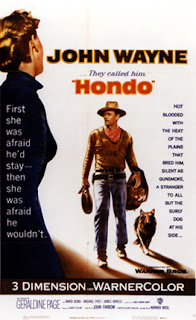 After a brief break, and a look at some of the Museum's current Scorsese Collects movie poster displays (gorgeous), it was time to head back for John Wayne in Hondo. Contrary to myth, Hondo had one of the widest 3-D releases of any film from the Golden Age, including a smashing three week run at New York's 3600-seat Paramount Theater. But it's rarely been revived in 3-D and last night's MoMA audience got to experience something special as this is the first time in over 60 years that Hondo has played in Manhattan in 3-D. Even though there have been any number of 3-D festivals in the area since the late 1970's, Hondo was not among the titles screened at them. The film's owners, BATJAC Productions (the John Wayne estate) gave Hondo a photo-chemical preservation in 1994 and then a new digital restoration, clean-up and alignment was completed on it in 2013. For a fully detailed look at its history, I highly recommend this article over at the 3-D Film Archive's website: The 3-D Release of HONDO

Once again, the theatre's lobby filled quickly and a long line of eager ticket-holders formed with a lot of repeat customers from the Rarities show. Dave Kehr opened the show with some brief introductory notes and then presented BATJAC's Gretchen Wayne (wife of the late Micheal Wayne and now the custodian of the Wayne estate) who further detailed the problems they faced bringing Hondo back to 3-D life. 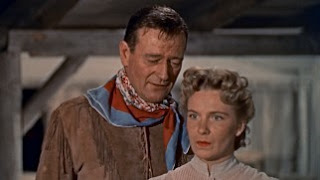 The film itself is terrific, a very solid western with a particularly strong performance by Wayne. His scenes in the first third with Geraldine Page are a delight and shows just how good an actor he could be with the right material. The later action scenes are expertly done and the story gathers to a very satisfying conclusion. Technically, the film is superb - one of the most natural-looking of all the 3-D films from that time with an exceptional use of screen space and depth and a minimum of off-screen gimmick shots (arrows, knives, etc.). There are a number of shots in the film that are not in 3-D due to camera malfunctions while shooting on location, but the digital work they've performed keeps it from becoming a distraction.

Again, as with 3-D Rarities, the audience greeted the conclusion of the film with a sustained round of applause. Sadly, there are no plans for Hondo to get a Blu-ray 3-D release, your only chance to see it the way its makers intended will be at one of the upcoming MoMA screenings - the schedule is HERE.