RIDE THE HIGH COUNTRY on Blu-ray from the Warner Archive 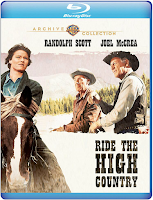 I'm very pleased to offer a few words about a terrific new Blu-ray release from the folks at the Warner Archive Collection: Sam Peckinpah's RIDE THE HIGH COUNTRY starring Joel McCrea and Randolph Scott. It was released back on Blu-ray in April and I finally got this on the big screen the other night. It's a western set in an indeterminate time period but definitely the same end-of-the-west era as "The Wild Bunch" since there are also appearances by motorcars early on. While it seems it might be a conventional western - man hired to guard a gold dust shipment hires an old friend as his backup yet the old friend has something else on his mind - it's much more than that. The movie is simply phenomenal - it comes alive through the history that's etched in the faces of our two leading men. Scott relishing the thought of convincing his friend to abscond with the gold... McCrea reciting that he just wants to "Go into my House justified" - fantastic moments from these two screen legends at the end of their careers. I got a genuine thrill when Scott comes riding back in to rescue his partner; sitting there alone and I wanted to cheer like I did the first time I saw it 35 years ago. [For you kids, it's like when Han Solo unexpectedly comes back to help Luke during the attack on the Death Star in Star Wars...but even better.]

As for the Blu-ray, wow, what a beautiful transfer (aside from the windowboxed main titles which is wholly unnecessary at this point with flat screens). I don't have a reference other than seeing 35mm repertory prints back in the 80s, and the old DVD, but this Blu-ray looks fantastic color-wise and every other-wise. Detail and stability are perfect. Warner says that this is a brand-new film scan and mastering and nothing on-screen betrays that. Audio is DTS-HD MA 2.0 mono and is likewise solid. The disc has an audio commentary by the 'Peckinpah mafia': Paul Seydor, Nick Redman, Garnet Simmons, and David Weddle which I sampled for a few minutes - it's full of details about Peckinpah and the production of the film so I look forward to listening to it in its entirety some day...maybe after I retire. There's also a 23 minute featurette entitled "A Justified Life: Sam Peckinpah and the High Country" which was produced for the 2006 DVD release and tells about Sam's early life via clips, photos, etc., interviews with his sister, and more. Pretty essential viewing for a Pekinpah fan as it gives a good insight into his personal history that fuels the themes of many of his films.

Don't hesitate...this is one of the great ones. Get it right now.